Rent an apartment in harmelen

We do not have any available rentals in harmelen, but take a look at the rentals in De Meern 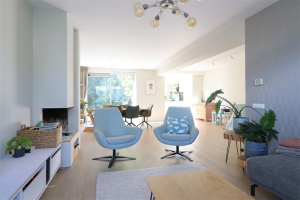 It is good to live in Harmelen, a village of about 8,000 residents in the town of Woerden. Harmelen is crossed by the Leiden Rhine, adjacent to the Utrecht district Vleuten-De Meern. Harmelen has a very friendly atmosphere without being kneuterig. With a rental apartment in Harmelen is nature nearby and amenities are just around the corner.

Renting an apartment in Harmelen, an old agricultural town

Harmelen in 1202 is first mentioned in ancient writings. It is referred to as ꞌHermaleꞌ. The village is built around the medieval church. Harmelen has traditionally been an agricultural town. In addition to livestock comes from the early 20th century, horticulture, especially in the Harmelerwaard and Old Country. Harmelen grew from the 50s of the last century into a small commuter village. Harmelen went in 2001 after a reorganization in the town of Woerden.

Renting an apartment in Harmelen North or South

Harmelen can be divided in Harmelen Harmelen North and South. You can rent an apartment in Harmelen in or near the Kalverstraat, the main street of the village where most of the shops are located. Harmelen is also known for its annual September market and carnival. Renting an apartment in Harmelen offers you the chance to visit House Harmelen, a former castle built in 1270, was demolished in 1720 after a storm and was rebuilt in 1947. Harmelen house was along the old course of the Rhine.

For maximum accessibility and diverse neighborhoods

there is an excellent access to the A12 eastern ring road as of Harmelen. Harmelen a former railway station, railway stations and Woerden Vleuten are nearby if you choose to rent an apartment in Harmelen. There are also good bus links to Woerden and Utrecht. Harmelen is characterized by many bushes, timber quays, open grasslands and ribbon development on the Old Rhine. The living quarters are spacious, child-friendly and green colored. Renting an apartment in Harmelen making it a godsend.

Apartment rent in Harmelen, in the nicest village of Utrecht

Harmelen is the hometown of several famous athletes such as multiple world champion cycling Ellen van Dijk, former professional cyclist and team manager Theo de Rooij and Dico Koppers, professional football player with Ajax and FC Twente. Harmelen is also a village in the Green Heart, centrally located in the Netherlands between Utrecht and Woerden. Harmelen was in 2013 by the listeners of Radio 3FM elected ꞌleukste village Utrechtꞌ province. All the more reason to decide to rent an apartment in Harmelen. Rent an apartment? Place an ad for free
Back to the top
Search for the most popular places